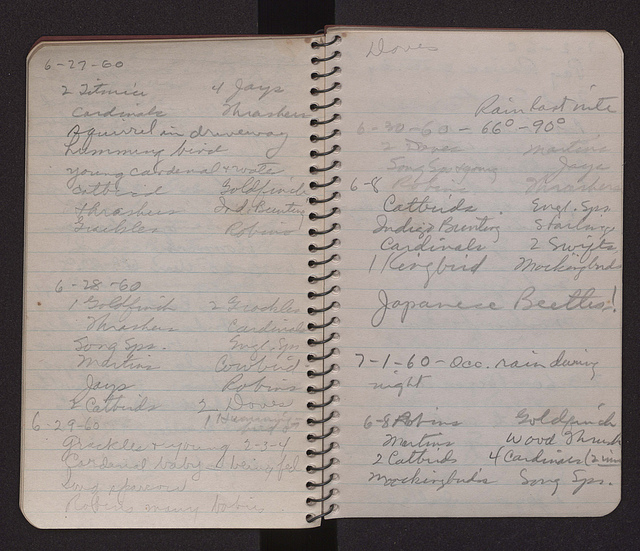 “I’ve been keeping a diary for thirty-three years and write in it every morning. Most of it’s just whining, but every so often there’ll be something I can use later: a joke, a description, a quote. It’s an invaluable aid when it comes to winning arguments. ‘That’s not what you said on February 3, 1996,’ I’ll say to someone.”

“I got out this diary and read, as one always does read one’s own writing, with a kind of guilty intensity. I confess that the rough and random style of it, often so ungrammatical, and crying for a word altered, afflicted me somewhat. I am trying to tell whichever self it is that reads this hereafter that I can write very much better; and take no time over this; and forbid her to let the eye of man behold it. And now I may add my little compliment to the effect that it has a slapdash and vigour and sometimes hits an unexpected bull’s eye. But what is more to the point is my belief that the habit of writing thus for my own eye only is good practice. It loosens the ligaments. Never mind the misses and the stumbles. Going at such a pace as I do I must make the most direct and instant shots at my object, and thus have to lay hands on words, choose them and shoot them with no more pause than is needed to put my pen in the ink.”

– Virginia Woolf in A Writer’s Diary

“The diary taught me that it is in the moments of emotional crisis that human beings reveal themselves most accurately. I learned to choose the heightened moments because they are the moments of revelation.”

I sometimes delude myself about why I keep a notebook, imagine that some thrifty virtue derives from preserving everything observed. See enough and write it down, I tell myself, and then some morning when the world seems drained of wonder, some day when I am only going through the motions of doing what I am supposed to do, which is write — on that bankrupt morning I will simply open my notebook and there it will all be, a forgotten account with accumulated interest, paid passage back to the world out there: dialogue overheard in hotels and elevators and at the hat-check counter in Pavillon (one middle-aged man shows his hat check to another and says, ‘That’s my old football number’); impressions of Bettina Aptheker and Benjamin Sonnenberg and Teddy (‘Mr. Acapulco’) Stauffer; careful aperçus about tennis bums and failed fashion models and Greek shipping heiresses, one of whom taught me a significant lesson (a lesson I could have learned from F. Scott Fitzgerald, but perhaps we all must meet the very rich for ourselves) by asking, when I arrived to interview her in her orchid-filled sitting room on the second day of a paralyzing New York blizzard, whether it was snowing outside. I imagine, in other words, that the notebook is about other people. But of course it is not.

“On Keeping a Journal. Superficial to understand the journal as just a receptacle for one’s private, secret thoughts — like a confidante who is deaf, dumb and illiterate. In the journal I do not just express myself more openly than I could to any person; I create myself.

The journal is a vehicle for my sense of selfhood. It represents me as emotionally and spiritually independent. Therefore (alas) it does not simply record my actual, daily life but rather — in many cases — offers an alternative to it.

Thank you for taking the time to comment! Cancel reply